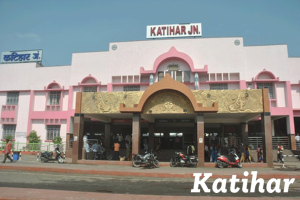 Katihar is located at 25.53° N 87.58° E. It has an average elevation of 20 metres. The main rivers of the District are mighty Ganga (southern boundary, 25 kilometers from Katihar Town), magnificent Kosi (western boundary, 30 kilometers from Katihar Town) and beautiful Mahananda besides many other small rivers like Kari Kosi (flowing by the side of Katihar town), Kamla etc. The Kosi (Sorrow of Bihar) merges with Ganga at the south-west boundary of Katihar District. This District shares boundary with two states i.e. Jharkhand at the southern side and West Bengal at the eastern side. The Bangla Desh lies around 80 km east of Katihar town and Nepal lies around 100 km north of Katihar Town. There is rail connectivity to both the borders from Katihar railway station. The hills of Jharkhand near the southern bank of Ganga is even visible from Katihar Town on a clear day. Its proximity to the Himalayas in the north, Jharkhand plateu in the south and a multiple of rivers combined with good rainfall gives it a distinct climate which can be termed more or less pleasant during most of the year. The rainy season flood is an annual feature. And on 2nd October 1973,Katihar acquired status of an independent district.

Katihar is a city situated in the eastern part of the state of Bihar in India. It is the regional headquarter of Katihar district. It is one of the larger cities of Bihar & is known all over East India for its highly strategic railway junction.

The city of Katihar is one of the most well maintained cities in Bihar with the city well lighted up throughout the night.There are LED lamposts fixed to a stretch of up to 5-6 kilometers through the middle of two-laned road leading to Katihar Junction & further up to Binodpur area via a roadway bridge. There are also 2-3 walkover bridges to facilitate localites because the entire city is traversed through a wide space occupied by a network of railway tracks.